As an aspiring author I used to love reading about how other authors got ‘The Call’ – that phone call or email when a publisher tells you they want to buy your book. The one thing I learnt reading all of these stories is that the path to publication can be so different. Mine was no exception. In 2013 the national Romance Writers of Australia conference was in Fremantle for the first time. Being in my home state was too good an opportunity to miss so I bought my ticket. Then the organisers announced a panel they called Survivor: Submission Island. The panel was made up of two agents and four publishers, and conference attendees were encouraged to send in the first three pages of their manuscript. The pages would be read out and the panellists would hold up a stop sign when they would have stopped reading had they received the manuscript on the slush pile. When the three pages were completed, or all panellists had put up their stop signs, the panel would then say why they stopped reading. If they didn’t stop, it was considered a request for the full manuscript.

I thought this was the perfect opportunity to get my manuscript in front of six people who could help get it published, so I sent off my three pages. There was a strong chance it wouldn’t be one of the manuscripts that was read out anyway. What didn’t occur to me was if it was read out, it would be heard by hundreds of people and I would have to sit there watching everyone’s reactions to it!

So the day of the panel arrived. I sat near the front and waited nervously as other manuscripts were read out. Then Jennie Jones who was one of the manuscript readers, announced the next manuscript was titled, What Goes on Tour – my manuscript! The nerves hit me and I tried to keep my hands still as she began to read. Do you know how long it takes to read three pages out? It felt like eons and listening to your story is so different from reading it. It sounded so awful and I made notes to tighten this bit and cut that bit. Then Jennie stopped reading. She’d got through the whole three pages. Two of the panellists said they weren’t interested in it, because they either had a rock star story on the books, or they didn’t think rock star stories sold. Fair enough. The other four liked it and requested it! Four requests for the full manuscript! It was incredible! Those of you who aren’t in the writing business possibly don’t understand what a BIG THING this is. To skip the slush pile (the pile of manuscripts which are unsolicited by the publisher) and get straight in front of the person who can say yes to buying your book is worth its weight in gold.

The day after conference ended, I reread the entire manuscript, made my final tweaks and sent it off.

Two months later I got an email from Joel Naoum from Momentum. The subject line was simply “What Goes on Tour” so I braced myself for another rejection and opened the email. The first line 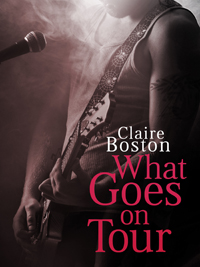 was your basic thanks for submitting, then came the line “I loved it!” My heart skipped a beat as I read as fast as I could. He mentioned what he loved about the story and then I read the line that every aspiring author longs to read, “I’d love to make an offer for publication.”

I think I may have screamed, I definitely couldn’t read on because tears had flooded my eyes and my whole body was shaking. Finally, after eight years of writing, someone wanted to buy my novel. When I’d finally finished screaming and doing a manic happy dance I ran to the phone. My husband was at work and he’s a nurse so he can’t easily come to the phone. I tried his mobile and left a slightly garbled message and then too excited to sit still I rang my mum. All I got out was, “They want to publish my book,” before I burst into tears again and listened to my mum screaming at the other end.

Four short months later, What Goes on Tour, Book 1 in The Texan Quartet came out. I was a published author!

The next book in The Texan Quartet – All That Sparkles is out next month.