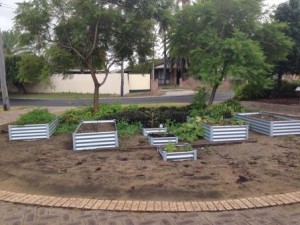 If the zombie apocalypse ever happens, I’m a goner. When life gets down to survival of the fittest there are three things everyone needs: food, water and shelter. Although I’m reasonably smart, have a black belt in Tae Kwon Do and reckon I could outrun any of those monsters, I would fail in one monumental way. Food. You see my vegetable patch is pathetic.

I have these grand ideas of producing enough fruit and vegetables to feed my family – having enough tomatoes to make pickles, enough capsicum to roast and store, and so many pumpkins I could start my own jack-a-lantern business. Unfortunately none of these dreams ever come to fruition.

My first attempt was a herb garden – how hard could that be? I set it up out the back, had a lovely little brushwood fence around it to deter my new puppy and planted chillies which I was told would keep my dog away. I came home one day to find my herb garden destroyed and Tilly munching on a chilli bush.

My second attempt happened more recently. I decided the backyard was pointless because my dogs are far too curious for their own good, so I ripped up some of the lawn out the front and put mounded garden beds in there. I had great success with the vegetables I don’t eat a lot of (not sure why I planted them!) like eggplant and cucumber and a little success with tomatoes and beans. Not one to give up too easily, I moved on to raised garden beds because the soil was spreading everywhere and our trailer kept running over the beds!

The snow peas withered and died within weeks, the tomatoes did fine but we kept forgetting to pick them and the watermelon sprawled all over the ground and gave us great hope until it too 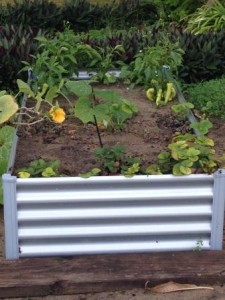 withered a died. We did get one small watermelon which I am slightly scared to cut open in case it’s horrid inside! My husband made the very valid point that we’ve probably spent more money on the vegetable garden than we would have spent buying the vegetables we grew!

But I will not be deterred! There’s got to be a way for me to get lush, bountiful crops like you see on Gardening Australia or Better Homes and Gardens. I just need to figure out the secret. Perhaps it would help if I fertilise it regularly… Ok, so I admit it – as much as I love the idea of vegetables, I do forget to maintain the vegetable beds. I mean when I first plant them, they get fertilised and watered in and then suddenly it’s three weeks later and I’ve barely so much as looked at them. Surely there must be some kind of easy care guide for vegetables out there that tells you when you need to plant, how often you need to fertilise and what you need to use. I get so confused with trace elements, seaweed solution, manure, nitrogen, lime etc – what’s supposed to go on which plant? I’m sure if I had a guide I could stick to it and have success (at least that’s my story and I’m sticking to it!).

Don’t get me started about strawberries. I have no idea how strawberry farms get those rich, plump, sweet and juicy berries in such amazing quantities. If you look at the photo with the capsicums you will see my attempt at the front of the garden bed. Those plants have been in for months and I’ve had a couple of more white than red sour berries from it. Is it really so hard? (Don’t answer that – I know the answer’s yes!)

I’m going to give it one last shot. The latest Gardening Australia said it was time to put your winter brassica crop in (that’s broccoli and kale to us lay folk) and so I’m determined to succeed. I won’t plant kale because seriously green smoothies are not my idea of a tasty drink (now if I could plant an iced chocolate with whipped cream and ice cream plant I’d be all over that!), but I can plant some broccoli or broccolini and maybe some cauliflower or cabbage… I’ll have to check out what is a good winter crop. And I’ll keep you posted. Perhaps one day I will be able to survive the zombie apocalypse.

Oh, and if any of you have the secret to a great vegie patch, please let me know in the comments below!