How far would you go for love? What would you do to get back the person who means most to you?
It’s a question that literally cuts to the heart of us.And it reaches across all genres of fiction, as well as non-fiction.
And it’s the sort of question I love to explore in fantasy. Far from requiring the full cast of singing elves and dancing dwarves, I believe that the fantasy genre can bring in elements we find in our everyday lives.
I have always felt that reading fantasy requires readers to at least suspend their disbelief when they open the cover. If you can give them a solid basis of truth upon which to base the fantasy story, they will be more inclined to read it.
Creating characters that readers believe in is a source of great pride for me. And if you are looking to make a character that people can associate with, there is one universal emotion – love.
The three characters at the heart of my new series, The Last Quarrel, are a family. United by love, they have been torn apart by events that rock their peaceful land. To put the land back together, they are going to have to put the family back together.
Bridgit is stricken by fear. Having lost many children over the years, she is fiercely protective of son Kerrin and imagines ever-more shocking ways for harm to befall him.
But when real dangers come out of the night, she is taken and must find strength she never knew she had to get back to her family. She must somehow gather together a scattered group and escape their captors. To find her way home she is prepared to lie, cheat and kill.
Her husband Fallon is instantly determined to get her back. Without her, his life has little meaning. But he finds himself driven further than he ever thought possible to regain his lost love. Murder, torture, killing a friend, even regicide are all possible.
As for their son Kerrin, he will do anything to see his mother returned, even pick up a weapon when his mother had told him, time and again, that he must never risk himself.
Love propels them and takes them to extremes.
And, while the average reader may not find themselves taken to that extreme, they can at least understand what is driving these characters.
And if you believe in the characters, you are more likely to follow their journey.
As an author, that’s something that is close to my heart. 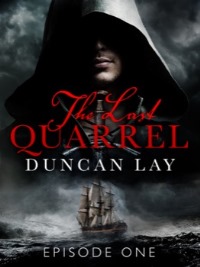 Duncan Lay is the author of two best-selling Australian fantasy trilogies, The Dragon Sword Histories and the Empire Of Bones, published by HarperCollins, and now the iTunes best-selling The Last Quarrel, through Momentum Books. The omnibus edition of The Last Quarrel will be released on April 23, while the print version will be in Australian bookstores in August through Pan Macmillan. In his spare time he is production editor of The Sunday Telegraph.

You can buy The Last Quarrel from Momentum.