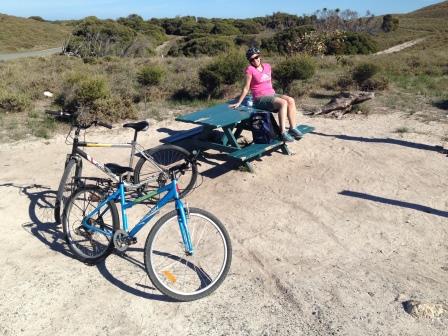 The other day I came across the acronym FOMO – fear of missing out – and that summed up perfectly the reason for my recent cycling experience. You see I’ve just been to Rottnest Island for a three-day break. Rottnest is a small island just off the coast of Western Australia and the main mode of transport around the island is bicycle. You can also catch a bus for an hour long tour, or you can walk.

Now, I haven’t been to Rottnest in about 25 years and when I was last there, I was on school camp and rode my bike around everywhere. If I could do it as a kid, surely I could do it as an adult – right? I spend an hour at the gym each day, I’m relatively fit and while Rottnest isn’t flat, there are only smallish hills. Plus, when I’m on holiday I want to experience the place and what better way to do that, than on a bike?

I conveniently forgot the other bike-related holiday activities that seemed like a good idea at the time (cycling in the Bali hills, mountain-biking in Germany (which did end in vomiting), and battling traffic in Hoi An), I ignored my husband’s warnings ‘Remember when…’ and hired the bike. I call myself an optimist, my husband (after he’s finished cursing my name after struggling up yet another hill) calls me delusional. When I examined the reasons why I wanted to ride a bike around the island (which I did while trying to ignore the burn in my thighs going up another hill), I discovered there was a large portion of FOMO in there.

Riding around Rottnest is what you’re supposed to do. You get to stop at all the bays, look at the ship wrecks from the shore, see all the quokkas up close, feel the fresh sea breeze on your skin and really get to experience the island. It will be great fun! 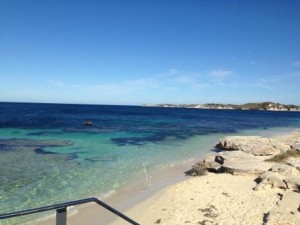 The rock in the ocean is actually a ship-wreck

The reality of riding around Rottnest is this. It takes you the first ten minutes of your ride to remember what riding a bike is like and then to figure out how the gears work. As a child, I never had a bike with gears so this did take me some time to realise you put the gears down going up the hills, and up coming down them (when you’re not gliding down feeling like you’re the sportiest person ever). The first kilometre is flat, so I settled in and thought, well this is easy, what was my husband worried about?

Then I hit my first hill. It’s only small so with a quick drop of gears, I made it up with only a slight pain in my legs. I sailed down the gentle incline on the other side, feeling like a million dollars. The sun is shining, the sky is blue and the ocean on this side of the island is sheltered and flat.

Another hill – this one a bit bigger than the last. Ok, by the time I reached the top there’s a definite ache in my thighs but it fades quickly. Then the next hill. When did they start getting so big? Oh, look, a lookout. We’d better stop and take some pictures (and rest the legs).

Getting back on to the bike I realised it’s not just the thighs hurting but my buttock as well. The seat is suddenly made out of concrete and bruises are beginning to form. Luckily the lookout is conveniently on the top of a hill so I glided down and then hit the next hill. OMG it is huge and my thighs scream at me, my breath is coming in short gasps. Were my early morning gym visits completely useless?

I think you get my point. We stopped at the lighthouse in the middle of the island (which is also at its highest point – ow) to review the map and made the quick and easy decision to ignore the rest of the island and to take the shortest route back to town. My husband had even resumed talking to me by the time we got back to the cabin! 🙂 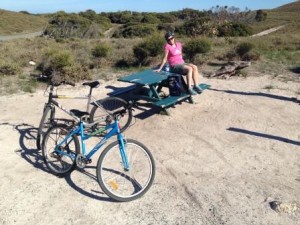 The next day we got a ticket for the hop-on, hop-off bus. It stops at all the beaches around the island, you get to see everything from air-conditioned comfort and you get commentary as well. It was SO much more pleasant.

So trust me. If you’re not a regular cyclist, you will not be missing out on a single thing if you take the bus around the island. You get a better view, less aches and pains, and a better relationship with your loved ones!

I’d love to hear I’m not the only one suffering from FOMO. Let me know what you’ve done for fear of missing out, that you’ve later regretted.