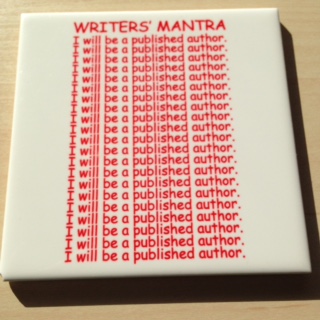 I had been writing for almost eight years when I finally got my first book contract. Over that time it was sometimes difficult to be positive and keep going when rejection after rejection came in. Many people told me it was impossible to get a book accepted by a publisher but I refused to give in. There were a couple of things which helped give me inspiration and reminded me that I could do this.

My husband bought me a coaster with a Writers’ Mantra on it. Every time I put my coffee mug down on the coaster I would repeat the mantra and remind myself that my goal was achievable.

Then I saw a quote while I was on the train one day in 2009. It was on someone’s T-shirt (as all good quotes should be!) and simply said:

Impossible is not a declaration, it’s a dare.

Those words really appealed to me and I wrote them down straight away. When I got home, I typed them up in big letters, printed it out, laminated it and stuck it to my wall just above my desk.

I find quotes really inspiring so I started making my own calendar of inspirational writing quotes. I’d gather them throughout the year and then put a calendar together and bind it to hang on my wall. It was practical and inspirational all in one!

Finally at the 2013 Romance Writers of Australia conference I met Sarah Wendell from Smart Bitches, Trashy Books. She told me that just completing a novel was an amazing achievement and by that stage I had written five. She said to me:

You wrote a book. That is SO FREAKING AWESOME!

It made me smile and it made me realise that it was an achievement. Yes, I might not have been published yet, but I had written a number of books and that was worth celebrating. When I got home, I typed that up and put it on my wall too.

As it turned out, it was at that very conference that Joel from Momentum requested my full manuscript of What Goes on Tour, and only two months later I had my first book contract! I’m so glad I never gave up!

So anytime you’re struggling with inspiration, find something to keep your spirits up and keep at it. You can get there in the end.