Shona Husk has another book out this month, this time a science fiction adventure. I’ve read the first three books in the series and I really like the premise. 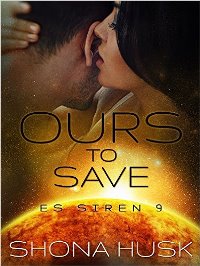 Some secrets are worth killing to protect …

Micah Stone sees Solitaire as a fresh start. With twenty years’ experience in the agriculture industry, he hopes the colony won’t make the same mistakes that were made on Earth.

To most people, Micah looks like a member of the well educated elite, but he’s really a Gaia activist. Not only did he lie about his daughter’s age to get her on board, but his partner is one of the most dangerous women on Siren.

Felicity Valez was once an Army explosives expert, and she was also a member of the radical Gaia Movement. After being sentenced to life for sedition, she wound up on Siren. To protect her partner and daughter while they’re on board, she needs to make sure that no one links the family together.

But her liaisons with Micah have been noted. And when her daughter’s life is threatened Felicity will do the one thing she promised Micah she’d never do again: rig an explosive that will kill.

No one on Siren is safe.