It's both my wedding anniversary and the anniversary of when my husband first asked me out this week. You see when we picked a date for our wedding, we decided to keep it simple and stick with the same date. A winter wedding isn't all that common, and yes there was torrential rain all day except for a small ten minute window when we all dashed outside to take photographs, but we liked the idea. I lost count of the number of times people said to me that it was good luck for it to rain on your wedding day. I didn't care. The day wasn't about the weather, it was about making a commitment to the man I love. 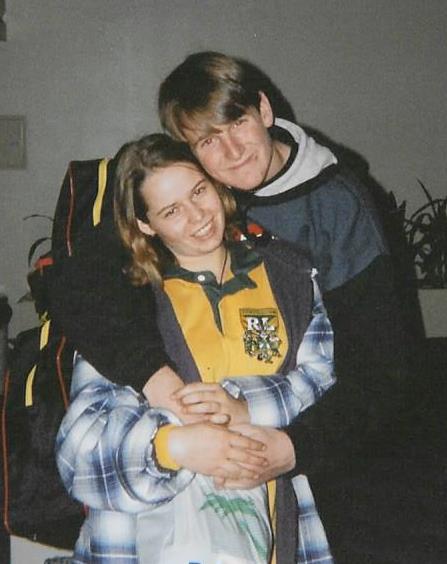 ​But let me go back to the beginning, twenty years ago. We both went on a school ski trip, flying across the country to get what was my first glimpse at snow. It was a great week and I really liked him. We hung out together, skied the slopes and I even bought him a drink when he'd left his wallet at the lodge.

Then the holiday ended and I had to wait a whole week to see him again at school. My first excuse to go past where he sat was to show him the photos I'd taken of the holiday. I wanted to ask him out but I couldn't get up enough nerve. I mean sure he'd hugged me (like in the photo) but he was affectionate to everyone, happy to pose in photos whenever anyone pointed a camera at him.

He was also an older man​ - he was in year twelve and I was only in year eleven. He probably didn't fancy me at all. I made my friends go for walks around the school with me at recess and lunch, hoping to catch a glimpse of him. We even sat in the gym watching him play basketball. It was then I almost got up the courage to ask him out, but chickened out. 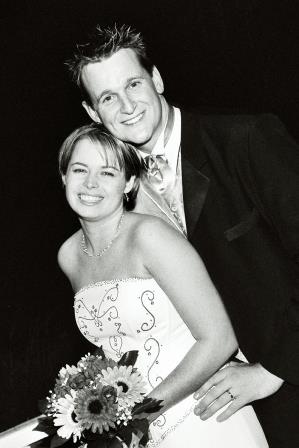 I was really excited when they arranged a ski trip reunion, everyone got together at Pizza Hut to chat about the holiday and share photos. A friend ​who liked another boy on the trip decided we should ask them to the movies afterwards, which we did. She chose the movie, Species, which I wasn't thrilled about until I realised it was the perfect opportunity to bury my head into his chest during the scary scenes! He didn't seem to mind. When the movie was finished, he kept me company while I was waiting for my sister to pick me up. (He had his own wheels - a scooter!) He kept me warm by wrapping his arms around me but I still didn't have the nerve to ask the question.

Then one day we ran into each other at the school canteen just before the end of lunch. We chatted and he casually asked, "Will you go out with me?" Well of course, I said yes! And the rest as they say is history.

It was another nine years before he proposed (but that's a story for another time) and we got married the following year on our anniversary.​