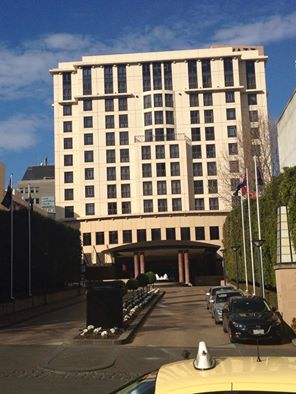 The last few days have been absolutely fabulous, if somewhat exhausting! August is a very important month for romance writers in Australia because it's when the Romance Writers of Australia (RWA) national conference is held. This year it was in Melbourne at the Park Hyatt hotel.

I flew to Melbourne extremely early on Thursday morning, arriving around midday. My friend Peta Crake​ and I had lunch together and sampled the wonder that is Melbourne coffee. I then explored the streets of the CBD while she went to check in to her room.

Melbourne is a fantastic city full of funky bars and restaurants, interesting people and artwork. I went to dinner with a couple of my critique group, Nina Blake and Juanita Kees​ and then headed for the David Bowie exhibition at ACMI. I really enjoyed seeing a little bit of the city as I knew the next few days I wouldn't see much more than the hotel!

Friday is the intensive workshop day and there were​ a number of options. I chose the business stream and learnt a little bit more about business planning, copyright and contracts, pitching to writers festivals and making social connections. I also got to meet fellow Momentum authors; Belinda Williams, Tania Joyce, Amanda Pillar whom I had met online but not in person. That's one of the best things about conference: meeting new people and catching up with others that you only see once a year. The Friday night cocktail party could be heard through the whole hotel  as romance writers reconnected. It's such a warm, friendly atmosphere: newbies who had never been to a conference before had their own special group so that they could meet people and not feel alone.

Afterwards the Momentum authors met in a bar to catch up and chat to Shelly - the wonderful Momentum representative who was at the conference. The drinks didn't just include romance authors, but also the Melbourne based authors who write other genres.

Saturday and Sunday was when the pace really kicked up. There were some fantastic keynote speeches by among others, Graeme Simsion and Anita Heiss, and some really great workshops. I went to a mixture of craft and business workshops and picked up some great tips about plotting, character, websites, and writing sex scenes. Some of the things that I heard, I knew already and were a refresher and others were new techniques to try. ​ 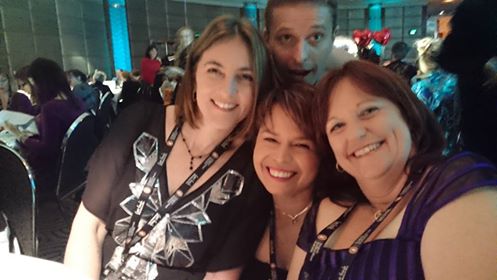 Saturday night was the Awards Gala night which is a wonderful event. The picture to the left is Peta Crake, me and Juanita Kees being photo-bombed by the half naked butler who was walking around!

The awards night is a chance to celebrate and acknowledge the wonderful writing by RWA members, as well as acknowledging volunteers of the organisation, and the media who have portrayed the romance genre in a positive light. There were a few tears, a lot of cheering and some dancing. A really fun evening.

By Sunday I felt slightly zombie-ish. My focus was not the best and it was difficult to concentrate but I did manage to take some notes and learn some interesting things about social media and men's brains.​ Finally, after the launch of the Adelaide 2016 conference (which looks excellent!), it was time to go home. Having to say goodbye to all my interstate friends for another year is really sad, but I know we'll be in touch over the internet. I've finished the weekend feeling, exhausted and yet buzzing with ideas on how to improve my work in progress and with new marketing strategies. It really is a must attend event.