I’m taking part in a Goddess Fish vitual tour! This book is an urban fantasy and book 2 of the Chronicles of the Celestial. It comes with a sneak peek excerpt and a chance to win! LaTaeya will be awarding a $40 Amazon or B/N Gift Card to a randomly drawn winner via rafflecopter during the tour. 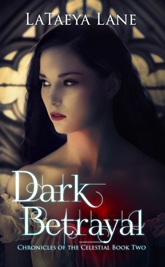 Nephilim Sydney London has embraced her angelic heritage, crossed the borders between life and death and traveled throughout the dimensions in order to save the people she loves. Exposed to a supernatural world, Sydney now must face the repercussions of healing her Darkness consumed mother Pandora. As a fugitive magical being Pandora’s involvement with the Angel Vampires is uncertain. Instructed by the Archangel Michael, Sydney must track down her mother before she possibly leads the Angel Vampires to Pandora’s Box. Sydney continues to risk her life as she delves deeper into the elements of a world that hangs in limbo. Her Guardian Angel struggles to protect her as the threats of evil rise in an attempt to recruit Sydney and possess her powers for their own malicious agenda.

The hospital was in disarray. My mother Pandora threw herself out of the window of her room seconds after I tried to heal her of the darkness that had held her for so long. I thought that healing my mother would cure her of her condition, but clearly, I’d been wrong. Almost regretting my actions, I could not gather the words to explain what really happened.

I think I blacked out for a moment. When I could think clearly again, I realized that a detective was staring me in the face with a little notepad in his hand. He looked at me with concern. “Are you okay, Miss London?” he asked. “You look a little pale.” I trembled slightly as I eyed him, and luckily, he assumed that I was in shock over everything that had happened—which was true to some degree. What he didn’t know was that I was worried that it was becoming harder to hide the truth about myself—about my powers and what I really was, despite the fact that I still hadn’t re-acclimated to being back on the Earthly realm after having astral traveled to so many other realms.