Shona Husk has to be one of the most prolific authors I know. She's had a book out almost every month this year. I really don't know how she does it! This is the third book in her rock star Face the Music series. 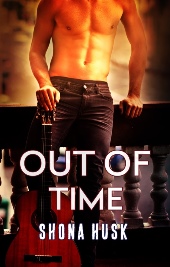 The fabulous New Adult series from Shona Husk continues: he wants to shut out the world; she wants to invite it in…

Mike Peterson has learned the hard way that the good really do die young. He and his mum only have each other, and now she’s losing her second battle with cancer. He wants to stay with her; she wants him to keep following his dreams. He doesn’t have long to decide and the rest of the band is waiting on him. Whatever choice he makes, he will lose.

Living at home has become impossible for Ava Brand. Her very religious, very traditional grandmother would like to see her married off to a nice Indian boy. But Ava wants to make her own choices. Meeting Mike gives her a chance to rebel.

What starts off as easy rapidly becomes complicated, as their problems expand and emotions bubble to the surface. Neither has time for complicated, as Ava’s family discovers her extra-curricular activities and Mike has to make incredibly hard choices. But love never waits for the perfect time, and Mike and Ava are going to have to decide if they’re playing for fun, or playing for keeps.