On Saturday I was officially certified for SCUBA diving. It was such an interesting and at times exhausting course and if you missed my write up of Day 1, you can find it here.  Day 2 was running through all the skills again, but in deeper water and we got to go on our first dive. It was off the Rockingham Foreshore which has a dive trail but unfortunately visibility was awful - only a couple of metres - so I spent most of the time trying to make sure I didn't lose sight of my buddy and the instructor. I also had issues with my buoyancy and discovered afterward that I had an extra three pounds in my BCD vest that I didn't know about. I made sure it was removed for day 3!

On Day 3​ we reviewed the skills again - I was getting good at taking my mask off underwater and putting it back on by that stage! Then we again dived the same dive trail but visibility was a bit better so it was more enjoyable.

The real highlight of the whole course was the last day. We went out to Rottnest Island for two dives.​ 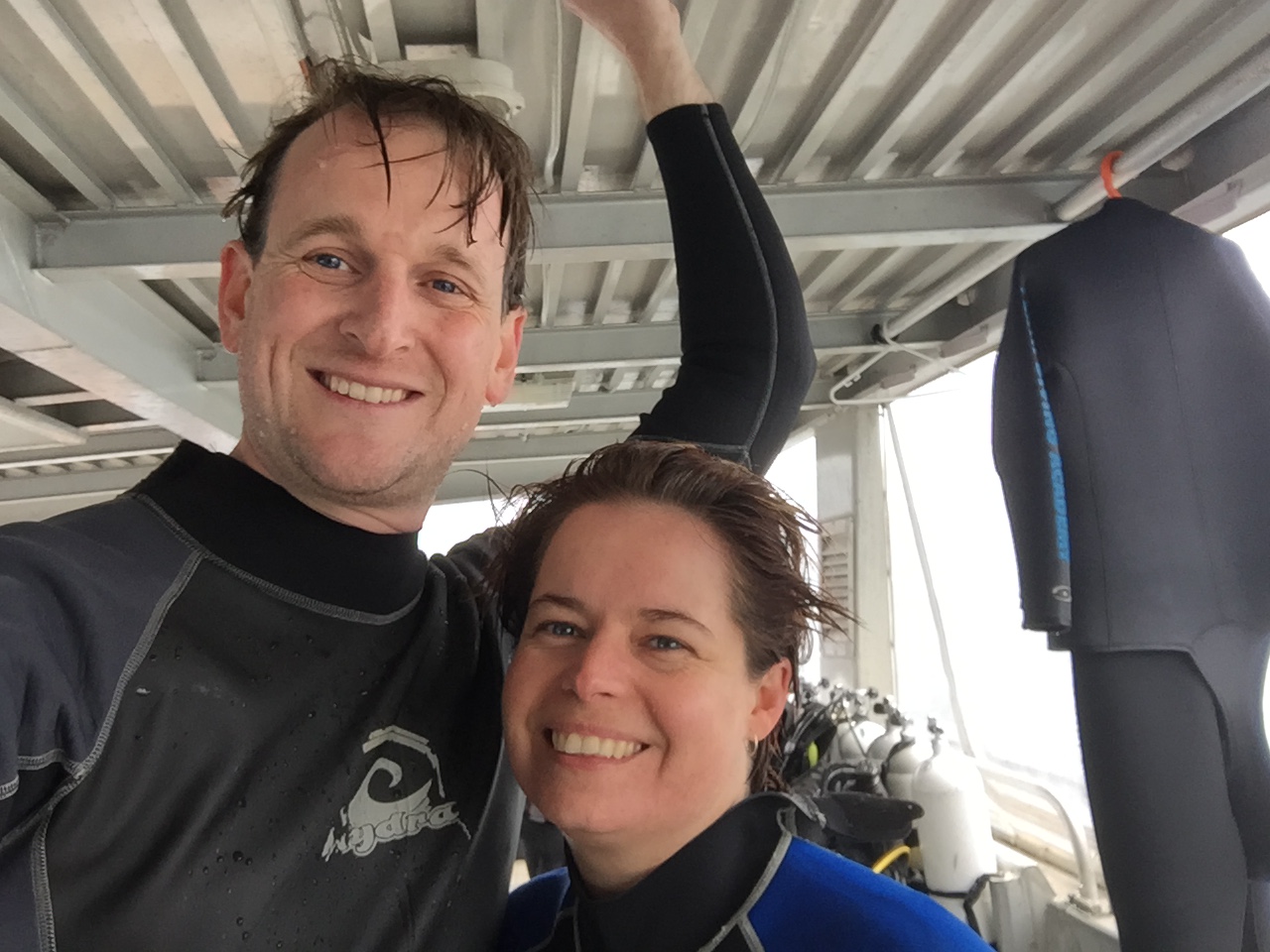 My husband and I after passing our SCUBA course.

The dive boat we went out on was the Lionfish IV and I have to admit I was impressed by their setup. It was all very professional and I felt secure knowing the guys were looking out  for us when we were under the water. Better yet, they provided a cooked lunch, morning and afternoon tea and HOT showers! Bliss!

The visibility out at Rottnest was amazing - at least 15 metres - which meant I didn't have to fret about staying so close to everyone. ​I wasn't expecting such diverse fish life out there. There was the most gorgeous fluorescent purple fish - I wish I'd had a camera! The coral, sponges and seaweed was also really interesting. One thing I was surprised about was how strong the surge was at fifteen metres down. There was no point trying to fight it, I just hovered where I was and then swam forward when the surge was going the way I wanted to go.

Quite a few people asked me whether I was scared of sharks while I was diving and to be honest, the thought barely entered my mind. I think the combination of being able to breathe underwater, having lots of other divers around me and our instructor wearing a shark shield allayed any concerns I had. In actual fact, I thought it would be kind of cool to see one swim past (as long as it kept swimming!).

I can attest that the Shark Shield really does work. It's a device that straps on to your ankle and has a long rubber tube that is about two metres long which drags behind. The problem is it doesn't distinguish between shark and diver. I was below our instructor on the ascent line and I felt something hit my head. At first I thought it was someone hitting me with their fins, so I backed away from the line, but I kept getting hit. Zap, zap, zap. I finally saw the Shark Shield right in front of me and managed to get away from it, but not before I'd been hit a half dozen times. It was NOT pleasant. 🙂 My teeth ached afterwards.

Now that we've got our SCUBA ticket, my husband and I have been looking into dive holidays and day trips we can take. I'm looking forward to exploring the whole new underwater world.

Now I just need to figure out what next to tick off my bucket list.