Teena Raffa-Mulligan is one of my critique group members and has been writing for decades. I asked her to write her call story today and you can find it below. I remember having her Stranger Danger book read to me in primary school!

When I went to a community policing talk for parents at my children's primary school in 1980, I had no idea it would lead to my first book deal and five minutes of fame.

The P&C Association had organised the session so we could learn how best to talk to our children about stranger danger.

I’d been doing some freelance journalism so I took notes and wrote an article which was accepted and published in the state's daily newspaper. I thought that was the end of my stranger danger awareness role but I hadn’t counted on my imagination kicking in. 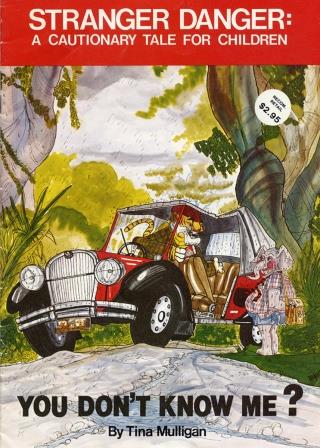 A couple of days later I woke with the start of a rhyming tale about an elephant and a tiger running through my mind. Throughout the next two days I wrote random verses about Jumbo Jim and Tiger Tim in between my everyday tasks, scrawling the lines on scraps of paper. When I thought the story was almost complete, I sorted all the rhyming couplets into the right sequence on the kitchen bench, filled in one or two gaps in the tale and headed to the portable typewriter on my roll top desk in the corner of the meals area to prepare the manuscript for submission.

You Don’t Know Me? A Cautionary Tale for Children was rejected by three publishers between May and August that year. Disheartened, I filed it away with my other 26 unpublished picture book manuscripts and concentrated instead on my casual job as a reporter for the new weekly local newspaper.

A year later I read a review of a children’s book that had been released by an independent Perth publisher and my mind clicked into gear. Maybe he would want my stranger danger story. It was worth a try. This time I didn’t have to agonise for the usual three to six months waiting for a response.

A couple of days later I got my dream phone call of an offer to publish. It was mid-October and the publisher planned to release the book in time for Christmas. I couldn't believe it. Finally, after 10 years of rejections, I was about to be a published children's author. It was such a wonderful early Christmas gift when the postie delivered my author copies arrived and the excitement didn’t stop there.

Because of its topic my book attracted lots of attention. I did TV, radio and newspaper interviews and after being endorsed by the West Australian premier, education and police departments, You Don't Know Me? was used in schools around the country and I was invited to do author talks to students. 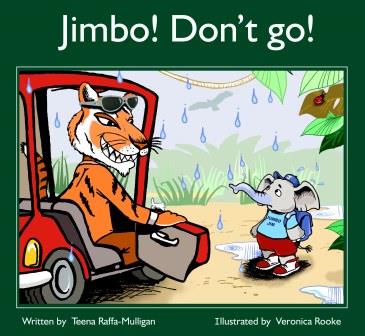 In time, life returned to normal and eventually the book was out of print but I continued to take it along to read during school visits. Today's children found it just as entertaining as their parents did when they were young and I was often asked where to buy copies. I had to say, "I'm sorry, you can't. It's unavailable."

In 2009, a quarter of a century after Jimbo made his first appearance, I decided to republish the story myself for a new generation of youngsters. Along with a change of title title, Jimbo! Don 't go! features new illustrations by artist Veronica Rooke. It was such a thrill to receive the copies from the printer and know I could now say, "Yes" when parents and teachers asked if they could obtain copies.

And while there have been other acceptance calls over the years, that first phone call offering to publish one of my books will always be remembered as special.

One rainy day Jumbo Jim is on his way home from school alone when a tiger stops and offers him a lift. Tim promises to get him home and dry quicker than a snake can blink an eye – but Jimbo says no. Mum has told him never to go with strangers. That’s when Tiger Tim says he is a family friend – and he has chocolate, too. Will Jimbo remember his mother’s stranger danger warnings – or go with Tim?

Jimbo! Don't Go! is available online from B﻿o﻿oks for Young Minds. You can also get the Jumbo Jim Safety Series short stories from Amazon as e-books.