I have a terrible condition. It's called volunteeritis. I always want to help so it takes a lot for me not to put up my hand and say I will do it. In fact if you look at what I'm doing at the moment, it's a reasonable list:

And the only reason I'm not on the Friends of Rockingham Arts Centre committee is that I thought twelve was a big enough number for a committee.

So when the VMXWA Annual General Meeting came along, I went so I could have my say on who was going to be on the committee. I was a little worried because the whole committee was stepping down and no one had nominated for any position. 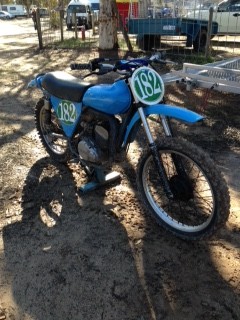 My bike - I call her the bluebird

So the call for President nominations came. You could have heard a pin drop. Now, without a committee we don't have a club and I enjoy pottering around at the back of the pack on my 1974 Yamaha DT 250. So I reluctantly raised my hand and said, "I'll do it."

I was instantly approved.

I did warn all the members that I do have a tendency to be bossy and with an information management background, I like my documentation. The first thing I asked for was the committee manual so I knew what I had to do. Again there was silence. So number one on my list is to write down all the tasks the committee have to do to make it easier when the committee changes. I have many more ideas on how to improve the running of the club, but I won't tell them all about it yet. I think it's best if we do one change at a time!

In the meantime I need to read our constitution and look through what documentation we do have, and prepare for the first committee meeting.