Those of you who follow my blog regularly will know that I like to be organised. If I don't have a plan of action then I can get stressed which is not much fun. So it is a little strange that someone so organised doesn't plot out her stories in advance!

So how do I stay organised?

It has evolved over the years. I first started writing fantasy and so the world-building involved necessitated that I had files about each culture and society. I used Microsoft Word and had a document for each one. This was also in the days of floppy disks and so the story was broken up into individual chapter documents because a floppy disk could only hold about 1.4 Mb.

I then discovered Microsoft OneNote which I immediately embraced. It allowed me to organise everything like a multi-sectioned notebook. I had a notebook for each novel or series and then broke it up into tabs for Character, Plot, Research and Setting. Each tab could have multiple pages and so I would build my series bible bit by bit. I used this for eleven books and had a template set up so each time I started a new series I just needed to click the template and all my tabs and pages were created for me.

The actually writing I did in Microsoft Word and used Chapter headings and the document map feature to easily flick between chapters. I liked having the total word count and seeing the pages add up. 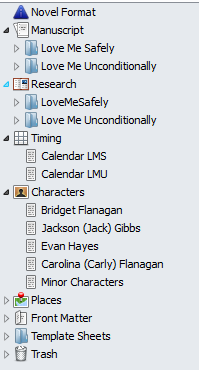 But in the last couple of months I've been experimenting with Scrivener and I'm quite enjoying it. It allows me to create my series bible in the program itself so I don't have to flick between two programs. I can also copy research information directly into the research section and have it on hand. The other thing it does is allow me to break my writing up by scene. I can see at a glance whose point of view the scene is in, how long it is and I can move scenes around easily. If I get an idea for a scene I need, I just create a new document, title it and leave it until I get up to writing that bit.

There are a few things that I don't quite like, but it may be because I don't know all the functionality yet. Writing in scenes can be great but it doesn't always lead to a great end chapter hook so I have had to go back and split scenes. Also because I am writing a series in one project, I can't easily see the word count of an individual manuscript because it totals both manuscripts' word count. Still I'm experimenting with different things and it's a lot of fun.

I'm always curious about the way other people organise their work, so if you have any tips, leave me a comment!