In my family you know Christmas is close when Mum has her annual Christmas Party. She always holds it at the end of November, before everyone gets too busy with work parties, school concerts and all of the other end of year events that seem to take over December. It's been running for about nine years now and each year there seems to be more and more people! 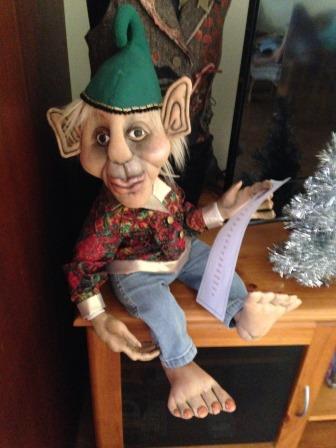 Mum has quite a close circle of friends and most of them had children, so the Christmas Party is a once a year reunion of both family and friends. I get to catch up with all the people I played with as a child, meet their partners and their children. I think the first year there was one child, my niece who was about one, and this year there were at least fourteen children running around mum's gorgeous backyard and having an absolute ball.

At seven o'clock Santa makes his appearance, and each child gets a book. One of the children is chosen to be Santa's helper and gives all the kids a chocolate. It's so much fun to watch them sitting on the Christmas quilt, waiting patiently (and some not so patiently!) for their name to be called.​ 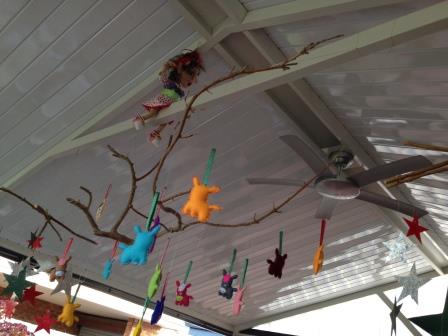 Merry Chistmas is keeping an eye on things

At the end of the night, all the children get to choose a felt Christmas ornament for the tree. This year Mum made donkeys of different colours. I offered to help her out next year because the number of children attending the Christmas party increases each year!

To make things nice and casual, everyone brings their own drinks and a plate of food to share. I love trying everyone's specialty dish and there's always way too much food!​ 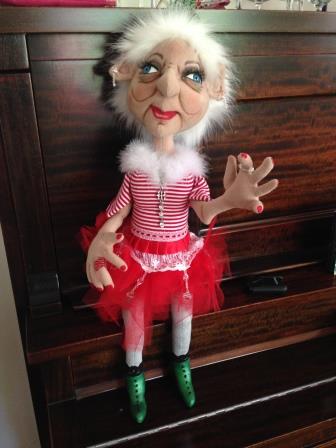 Each year the number of Christmas elves seems to multiply as well. My mum is incredibly creative and she makes the most gorgeous cloth dolls. All of the dolls in this blog post have been made by her. The list that the elf is holding above, gets updated each year with the names of all the children who are going to be at the party. My little cousin who is about two and a half was absolutely enamored with him and pointed out to everyone who would listen that her and her little brother's names were on the list. It was so cute.

So after the weekend I can definitely say Christmas is on its way. Mum's Christmas party has occurred and the countdown is on. Over the next month I'll be writing posts about other Christmas traditions I have in my family. If you've got any you'd like to share, make sure you leave me a comment below.