The part of the novel that I find the hardest to write is the ending. The beginning is easy - I've got a great idea and I'm excited about the project and so I dive in full of enthusiasm and gusto. This is also the section that I'll read over the most, tweaking as I go and my critique group always sees the first few chapters so I have five sets of eyes giving me feedback.

The middle can be tricky. There are always days when I feel like I'm writing blah, blah, blah, but if it gets really bad I can always skip to the next scene and come back to it when I know what I want to write.

But the ending can't be skipped. The first draft isn't done until I can type The End at the bottom of the manuscript and by the time I get to that stage I just want to be finished.​ 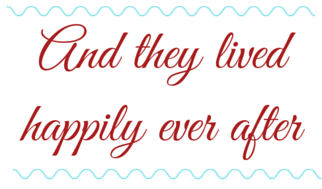 I'm always tempted to write, and they lived happily ever after like they do in fairy tales but I resist. The problem with endings is I want the reader to finish the book and have that warm, gushy feeling. I want them to put it down with a satisfied sigh, knowing that everything has turned out well in the end. But that can be so hard to write.

There's also the issue that the conflict has been resolved and so it's tying off any loose knots and making sure the reader has all their questions answered. Perhaps I need to start doing my editing in reverse order. Instead of beginning at chapter one, I should start at the last chapter! That might help get the enthusiasm back. Hmm, you know, that's not a bad idea! I'll have to give it a try in my next pass of editing. 🙂

Perhaps writing the ending will become my favourite part about writing!