​My husband very rightly said that part of our trip to Ecuador was about hiking places and jumping off things. We hiked to two waterfalls and jumped off ledges into the water. The first waterfall in the jungle was absolutely beautiful and the water was so refreshing. The second waterfall was at an altitude close to 4000 metres and the water came straight off the Cotapaxi volcano. My breath left me when I hit the water and the cold was so icy that I swear my skin shrunk trying to get away from it.

Those two things weren't too bad because the ledges were only a couple of metres high. I'm not all that keen on heights which is why, when giving the opportunity to go bridge jumping in Banos, I said no.

I should have stuck to my guns.

We started off the day going to the Tree Swing. That was my kind of thing, but I discovered if you looked up at the horizon and not at the ground, it felt like you were a very long way up and it was kind of scary. 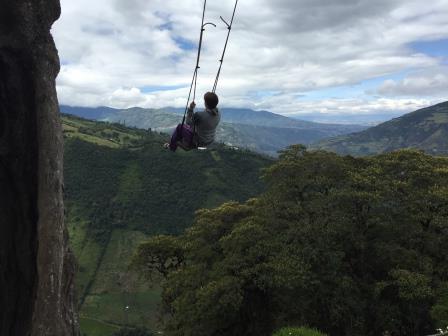 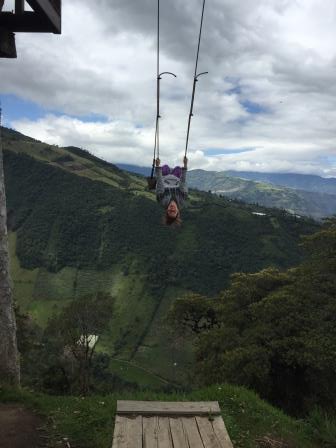 We then headed for the bridge jump. I was certain I wasn't going to do it. The bridge we were jumping from was a traffic bridge which meant you had to move off the road when a car came along. Then the platform you jumped off was just hooked over the safety rail of the bridge. My husband almost knocked it off when he was climbing on to it!

I watched person after person leap off the platform. Some showed no fear and laughed as they jumped and others were so scared they asked to be pushed. One girl pulled out entirely which meant there was a spare jump going.

Let me just say that the bridge jump would not pass Australian safety standards. The platform was tiny and it was a very long way down. I swear it was a hundred metres or more to the river below but my husband tells me I might be slightly exaggerating. 🙂

My fellow travellers suggested I might regret not jumping and that whole fear of missing out thing got to me. Damn it! So I suited up in the harness and I was the last person to jump off the damn bridge. ​In the video below you can see just how tiny the platform is, and how far a drop it is to the river. I'll let you be the judge!