After our volunteer session was over, we headed in to the Amazon jungle for a few days. It was a six and a half hour hike in close to one hundred percent humidity, and we were told 'don't touch anything'. This included tree trunks which could be spiky.

To be honest, I might have cursed David Attenborough once or twice during the hike.​ In all his wonderful documentaries when he's in the jungle, he's on flat ground, so I really wasn't expecting the almost vertical climb up on to a ridge and then down again and then up again and then down again... you get the picture. It was hard, sweaty work and we were making so much noise that we didn't see any animals, except for the baby tarantula which was the size of my hand!

Our guide, Fabio could have passed for Rambo with his machete, and he was excellent at showing us medicinal plants and how to build traps and shelters. It was really interesting stuff (which I've tucked away to percolate for a future book!). When ​we finally made it to the jungle lodge, it was a huge relief. We all threw on our bathers and jumped in the river. Later that week I asked Fabio how long it takes him to do the hike by himself. His answer was, "Two hours." Our six and a half hour achievement didn't seem so great after that! 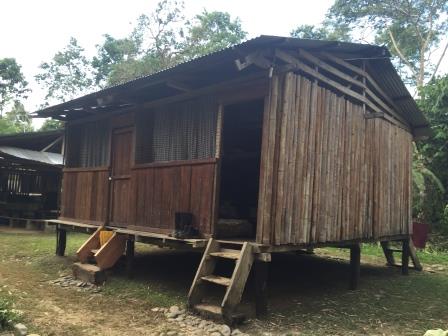 Cabin we stayed in 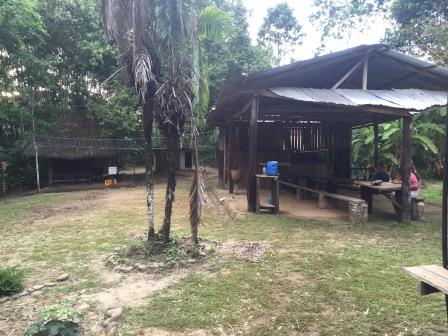 The lodge we stayed in was very basic, but comfortable. There was mosquito netting over the beds and no electricity in the cabins, but that didn't matter as we all hung out in the communal areas that were powered by a generator. We quickly took to bathing in the river, rather than using the single shower that was available.

While we were there we did several hikes through the jungle (though much shorter than the original one!), went tubing down the river (which didn't have rapids and was therefore far more relaxing than the previous tubing)​, visited a local village and played soccer with them (we lost badly!), had a shaman bless us, and visited Amazoonica, a zoo that helps injured animals.

The other thing we tried was the local moonshine. I have to say it went down really smoothly - not the burn I was expecting - but then the taste hit me and OMG it was horrid! The worst thing was, the flavour stuck around so when I burped hours later, I tasted it again. Yuck. I wasn't silly enough to try more than one shot of the stuff, though I can't say the same for some of my fellow travellers! ​

In all, the jungle gave us an opportunity to relax and recharge after the volunteer work. It was lovely to get even further away from it all and enjoy the ​sounds and smells of the forest and I did enjoy laying in the hammocks by the river and unwinding.