Today I have my friend Jenny Schwartz on the blog. Her latest release, Sky Garden definitely has me intrigued. I'm a bit of a fan of Jenny because she writes so many different sub-genres and there's always something to keep me interested. 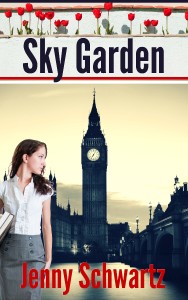 On the rooftops of London, you can be anyone.

A year ago, Lanie Briers escaped a serial killer. She grew up in a theatre family and her act was mediumship, but not anymore. Life, now, is a hidden retreat above a quirky Bloomsbury museum, where she waits and watches.

Nick Tawes is an unexpected intrusion. He’s a landscape architect filming a television series on roof gardens, and he intends to build one in Lanie’s aerial territory. He has his own demons, old family troubles, that lure Lanie out of her refuge and into living again.

But as summer progresses and the sky garden grows, Lanie’s enemy is closing in—because some secrets must go to the grave.