The whole reason for going to Ecuador was to do volunteer work. The group was based in Misahualli and took a canoe down the Napo River to Pakay Chicta, the village where we were doing the work. So what work were we doing? First we helped teach the children at the primary school English. Apparently when they get to high school they have to learn, and they can fall behind if they don't learn some in primary school. So we helped them with things like counting, colours, animals and greetings. 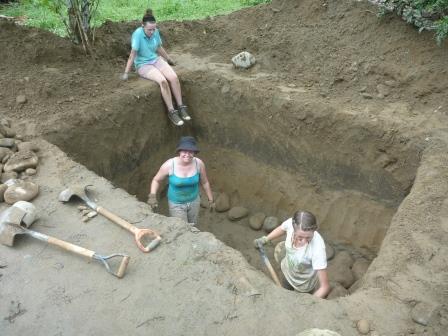 Then ​our main job was to build toilets for the village. This required a lot of digging. The holes we dug had to be 1.8 metres cubed and they would become the septic tanks for the toilet. We worked on a rotation system because once we got to a certain depth, there were only so many people who would fit in the hole. I would dig until I needed a break and then someone else would take over. It was hot, dirty work and climbing out of the hole when you were finished was quite difficult!

​We also had to transport sand which was needed to make the cement for the brickwork. We'd take the truck down to the river and shovel sand into the back until we had enough and then move it back to the village. The sand then needed to be sifted which was a manual job. Two people would work the sieve and that was probably one of the worst jobs, just because of the blisters we got on our hands. Plus the sand was damp and kept getting clogged in the sieve. 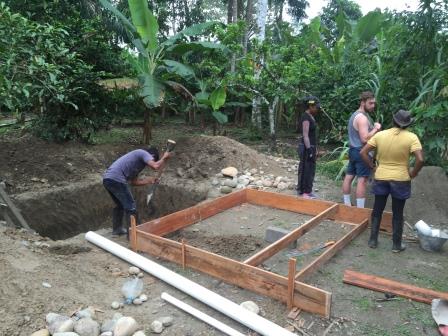 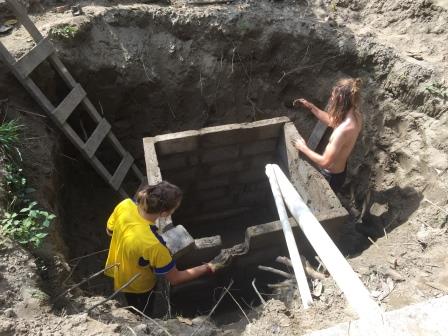 Building the wall for the septic tank

Next was the chance to actually start building! The septic tank needed walls around it and a concrete platform was added in front of the hole for the toilet to go on.

Finally the actual toilet was built and all that was left was to paint it. ​I was given the varnish to do the doors and I think I did a pretty good job, though the smell of the varnish gave me a head ache. 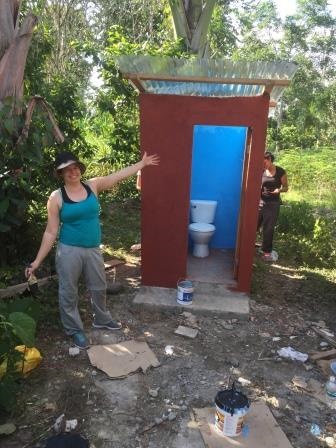 I won't lie, it was hard work. The houses were spread out through the jungle which meant that at times there was a four or five hundred metre walk from the supplies to the house. We did a lot of wheelbarrow trips with sand, gravel, bricks and cement.

Our first three days it rained a lot. It meant we were wet and soggy, but it did keep down the heat. On the last two days, the sun came out and it was scorching. I wore a long sleeved shirt just to make sure I didn't get burnt, but it was soaked with sweat in no time.

By the end of our time in the village, we'd completed three toilets, dug holes for four more, and started with the septic tanks and platforms. There are two more volunteer groups heading there in January and they'll continue with the work we didn't finish.​

The village hosted a party for us on the last day. We had some food and drink and the children danced for us. We'd all brought presents for the children so we split them evenly and bagged them up, before giving them out at the celebration.

It felt so great to do something for this community. The children were fantastic, so friendly and enthusiastic, and so self-sufficient. The parents have to go away to work which means that after school (which finishes at 12pm), the kids are left to their own devices. The older kids look after the younger ones. They enjoyed helping us, but especially loved the wheelbarrow rides back to the village after we'd delivered supplies to the houses! It really was a fantastic experience.