Last month was the ten year anniversary of my critique group. I can hardly believe I've been writing for so long and that we've all come so far.

Back in 2005 when I first started writing with a goal to be published, I was all alone. I knew nothing about the publishing industry and nothing really about writing a novel. I struggled along, alone for about six months ​until I discovered the Romance Writers of Australia. I immediately joined up and as the documentation suggested, I introduced myself on the e-loop, mentioning what I was writing and where I lived.

I received an email from Anna Jacobs​ asking if I wanted to join the critique group she was setting up. I think I might have screamed when I read the email. Anna was the only local author I knew of, and I knew she was very successful, so to have a real author ask me to join her group was a huge thrill. I of course said yes. Our first meeting was in January 2006. 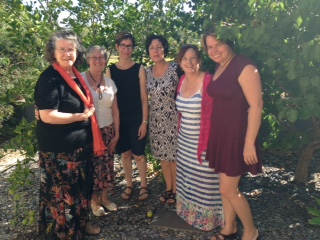 ​We all clicked pretty much immediately. Aside from myself, there were four other unpublished writers in the group. One lady dropped out in the first few months and from there we had six women who were striving for publication or further publication.

Leonie Knight was the first to get published, receiving a contract from Harlequin for her medical romance in 2011.​ She sold a further two novels before sadly she died. We all still miss her.

Another two of our members, writing as Nina Blake and Nora James​ were picked up by Harlequin's Escape imprint in 2013. Each time someone got the call we would celebrate together.

We added to our group about a year after Leonie died, inviting Juanita Kees to join us. Juanita had been published by Eternal and we've celebrated her additional sales with Escape since then.

I was the last to be published, getting "the call" from Momentum at the end of 2013.

My critique group has been the most supportive group for the last ten years. They've helped me improve my writing, they've commiserated with me when I've received rejections, and they've celebrated my achievements. I don't know that I would have stuck with my writing without their support. They ensure I'm not alone in my journey and we teach each other everything we know. It's been an absolute privilege to work with them and be able to call them my friends. Here's to another ten years of friendship, writing and success.