People often want to know where I get my ideas from and the one for Break the Rules came to me back in 2009. I suspect I had just finished reading Bad Ground: Inside the Beaconsfield Mine ﻿Rescue, which as the title suggests is about the Beaconsfield mine collapse which occurred in Tasmania in 2006. One man tragically died, and two more were trapped underground for two weeks. It was written by a journalist covering the rescue and the two miners who had been trapped. It was fascinating.

As always when I read or see something that makes me think, my brain starts working through ideas. What would I have done in the same circumstances? How would it feel to be under that rock? What if it had been my loved one who was trapped?

The original idea for Break the Rules was going to be based around an underground mine and I wanted both my characters to work in safety.

Then when I was thinking about which story to write next, I kept coming back to this one. I moved the story to the United States because my publisher at the time wanted it there, and because I'd done the research on Houston and wasn't quite ready to let me characters from The Texan Quartet go yet, I decided to set the series there. 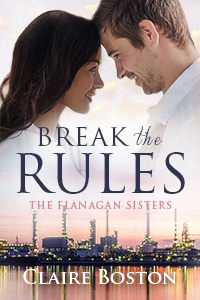 After a bit of google work I chose to change the setting to an oil refinery as there are a number in Houston and I have a friend who has worked on one and I could ask him questions. (That was a fun conversation!)

Finally because I had enjoyed writing Taima's story in Into the Fire, and enjoyed exploring a different culture, I chose my sisters to be migrants from El Salvador. Why El Salvador? I read there was a large Hispanic population in Houston and I have a friend who is from El Salvador. She's been helping me with the snippets of Spanish that are in the book.

It's interesting going back and reading the couple of paragraphs I wrote when I first came up with the idea. Surprisingly, not much of the story actually changed when I wrote it. Many of plot points I wrote down made it into the story, and I was able to write it quite quickly. That doesn't always happen!

If you want to check out Break the Rules, you can find all the pre-order links here.