Today's guest is fellow Momentum author, Adina West. Adina shared the same release day with me in February when her book Dark Child (Bloodsworn) came out at the same time as Into the Fire. Bloodsworn is the third book in the Dark Child series. 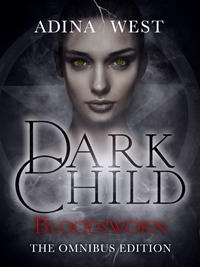 It’s open war between the Families of Power and the Tabérin. Two ancient races, witch and vampire, are locked in a deadly battle, and Kat Chanter, descendant of both warring bloodlines, is the only hope for peace …

With the fate of two races resting on her shoulders, Kat is determined to make the best of her forced visit to her grandmother Imara’s Napa compound, and learn all she can about the Families of Power and her newly discovered witch heritage. But she quickly learns that Imara’s word can’t be trusted. Prejudice runs deep in the old coven leader, and her grandmother remains committed to a war with the Tabérin that Kat would do anything to stop.

But Imara’s war isn’t the only threat to the fragile balance between the races that has endured for centuries. Fanatical factions within the European covens plot to resurrect an ancient power best left sleeping, and the new Vodas is building his dynasty on the backs of a personal guard willing to fight to the death to give him what he wants.

With the unsolved murder of a young witch boy raising as many questions as answers, Kat is discovering blood is the key to everything, including the new Vodas’s subjection of his sworn elite.

In this world, blood is power. But blood can betray you.