My foot rest broke last week. It was only a cheap plastic one, but I'd only had it about eighteen months so I was a little disappointed. I mean, how much weight goes on an under-the-desk foot rest? Not much.

Anyway I looked at the design and decided I could do better than plastic. I had some left over ply wood in the shed​, so I measured it up and there was enough for a replacement. It would only take a few minutes to cut it out, using the broken plastic as a template, and I'd have a brand new foot rest.

Have you ever noticed that DIY projects always go so much quicker and easier in your head than in reality?

It started off well. I have a jigsaw cutter and it had a new blade so cutting out the basic shape was a piece of cake. Then I had to cut the four holes for the metal to go through. It should have been easy. I mean all those home renovation programs always show you how to drill a hole first and then insert the jigsaw to make the oval cuts. Easy.

Ok, so what else could I use?

There was a Dremel tool sitting on the counter, one of those hand tools that have all the extensions you could possibly want. Except the kind of thing I needed. But there was one that was kind of close.

So with sawdust flying everywhere, I eventually cut four roughly oval shaped holes out. I searched through draws until I found sandpaper with enough grit left on it to sand the creation and I was done. I tried to put the rest back together but because the wood was thicker than the plastic and the metal legs were curved, the holes weren't big enough.

Back to the Dremel.​ After more sawdust and some swearing I managed to get the legs back in place. One foot rest, completed. Except it was kind of plain, so over the weekend I gave it a coat of paint (ok, let's be honest it was four coats; undercoat, two of paint and one of varnish so that took all weekend when allowing for drying time!) and now it looks wonderful. 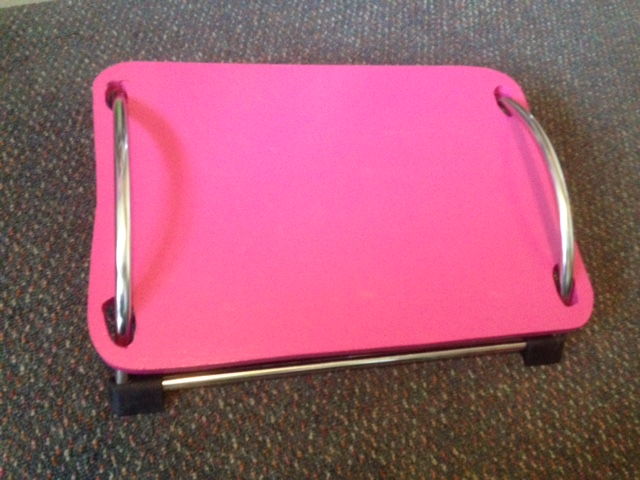 For all of the time it took me, it would have been much easier to go out and buy a new foot rest, but I am kind of pleased with it and it does match the green and pink colour scheme of my office.