Jenny Schwartz has done it again! This is the fourth book in The Collegium series and I honestly don't know how she writes so fast, but this books sounds fantastic. 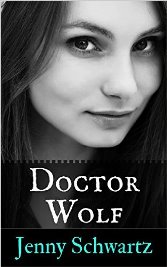 A werewolf in London romance.

Liz Jekyll might be the most wanted werewolf in London—wanted for dating, that is—but she doesn’t take it as a compliment. In fact, it’s a wretched nuisance because Liz has a vital secret to hide. What she needs is a disinterested werewolf who could pretend to be her boyfriend.

Carson Erving would be very interested in Liz if it weren’t for Gentiana Aeternae. The botanist werewolf from Alabama has found the legendary Elixir Gentian, and ruthless people will do anything, kill anyone, to get their hands on a plant that can grant an extra hundred years of life.

As danger explodes around them, two very independent werewolves will have to do the unthinkable and rely on one another. But when Liz’s secret is revealed, who will die?