Friday night saw the opening of the Rockingham Writers Centre book fair, and the official launch of Break the Rules. It was a great night with about 40 people coming to the joint launch with Demelza Carlton. Bec Thomas, the chairperson of Friends of Rockingham Arts Centre introduced both Demelza and myself and Demelza introduced her book, the Rockstar and the Billionaire first.

As both of our novels have characters working in heavy industry, we had some high vis gear and hard hats for decoration. You'll notice in the photo, that we both also recorded our talks, however I couldn't download my Periscope session later, so unfortunately that's lost. I'll make sure I just video it next time!

When it was my turn to talk, I explained where the idea from Break the Rules came from and ​talked about some of the research I did. I also read a short scene out, though there were a couple of children in the audience, so I suggested if they didn't like kissing, they cover their ears!

After a little bit of champagne was drunk, Demelza and I signed our books. It's such a highlight to meet ​my readers and over the book fair weekend I had a couple of readers come and say hi who had also come to previous events. One even bought some friends who bought my books which is always nice! 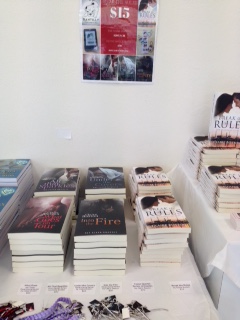 It was a really great night and the weekend was fantastic. I did two author talks, one with Shona Husk on Sunday, and the other with Beryl Coverdale today.

Break the Rules was really well received and I had a few people tell me they'd already read the ebook and they were getting the print copy for the collection. It's such a wonderful feeling to know someone loved my book so much that they want both formats!

The Texan Quartet also had a few sales with people buying Into the Fire to complete their collection.​ I had bookmarks and keyrings to give away which were well received and really the fair was just a fabulous vibe.

The next book fair will be in October and I'm looking forward to it.​