Break the Rules has been out for a month now and I must admit I'm a little underwhelmed by the sales figures. I was wondering whether it was because I didn't have Momentum advertising it for me (which could be part of the issue), or whether the setting of an oil refinery was a little ugh for some people and then I realised possibly the real reason for the low sales is because I haven't been promoting it much. 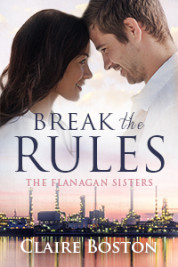 Usually I do a whole heap of promotion in the lead up to the release and then a bunch of advertising when it comes out, but this time I'm doing things a little differently. This time I'm being methodical about it. You see the one really big advantage of indie publishing ​is being able to see your sales on a day-to-day basis. This means I can see if I get a spike in sales around the same time as I do a bit of advertising. With Momentum I really couldn't tell what was working and what wasn't.

So I've been spacing out my promotions. ​The week after Break the Rules was released I did a New in Books promotion which cost about $60 (AU) and resulted in exactly zero sales. Not a great return on investment, but valuable information nonetheless. I know not to try them again. Similarly I didn't get a great result using Digital Book Today, though I have friends who have had a good success with them. I might get a better result if the book was discounted. This week I did a Twitter ad which was shown to 7000 people, resulting in about 200 people actually clicking on the link, and of those, about ten people clicking on the buy link. Better and cheaper than the other advertising, but still not great.

So what next? Well I've got a spot on the Fussy Librarian's newsletter next month and have booked a spot on Night Owl Reviews scavenger hunt as well. They are both scheduled at different times so I'll be able to attribute the sales to the advert. I've got a few more things planned for July, but I also need to start looking at promoting Change of Heart which will be out 21 July. ​

One thing I have discovered is that my book launch team really did ​help to get reviews up early when Into the Fire came out. I didn't have time to give the team a copy of Break the Rules before the launch date, and the difference is significant. Only five reviews on GoodReads for Break the Rules compared to the nearly thirty Into the Fire had after the same amount of time. I'll definitely be asking my launch team to help with Change of Heart. If you'd like to be on my launch team (and receive free books), then make sure you sign up for my reader group. I'll be asking for additional launch team members soon.

Though it's frustrating not to see huge figures straight away, I'm not disheartened. As Joanna Penn always says, being an author is a marathon not a sprint. I'm excited that I can now see what's working and what's not and make educated decisions about what to try next.​