On Saturday I was getting the washing off the line when I noticed a Rainbow Lorikeet face down in the garden. I figured it must be dead as it wasn't moving, so I went to pick it up before my dog, Tilly, found it and decided to bury it. When I picked it up, it was warm and breathing.

It obviously needed medical attention because it didn't so much as flinch, so I hurried inside, called my vet, who gave me the number of a wildlife group that cared for injured wildlife. I then called the wildlife group, all the while trying to distract Tilly who wanted to know what I was holding. They gave me the number of a different vet in my area, who said I could bring the bird over. 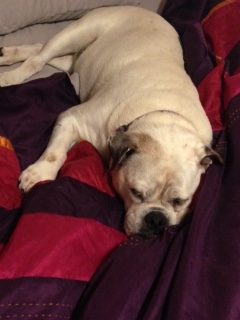 Great. I wrapped it up the best I could and then remembered I didn't have a car to drive. A quick phone call to Mum, who lives not far from me, and she raced over in her pyjamas​ to take me to the vet.

Relieved that the bird was going to get some help, I walked in and handed it over. The vet nurse took one look, pronounced it dead and that was it! Some time between me placing it in the basket for transport and getting it to the vet, it had died.

I guess the one good thing that came out of it is, I know who I need to call the next time something like that happens, and I can be faster with my response. ​