Shona Husk is seriously a prolific author! Today's book is part of the Skeleton Key series where a key opens the door to an alternative world. I was lucky to get an early copy of this novella and it was a great read! 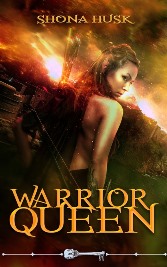 After a big night out to celebrate his last day at work, Bryce Allard stumbles home. By his door he finds a glass skeleton key that makes his front door open to another world.

Queen Keleti’s city is under siege. Betrayed by her cousin, she must find a way to save her city from the invading army. Keleti is a Heavenly, a hawk shapeshifter, so she could fly to safety, but she will not leave her people. When she finds Bryce hiding in her city she thinks he’s a spy.

Bryce finds himself caught up in the skirmishes and the siege while trying to earn the Queen’s trust. Trust gradually becomes affection, and Bryce begins to consider staying instead of returning home. However he soon realizes why he is here. There is one thing that no one is willing to do to end the siege: kill a Heavenly.

He has to kill Keleti’s cousin. But will he be thanked, or thrown off the cliff by the Warrior Queen?