This is another delightful sounding book by Heidi Wessman Kneale. I've read her anthology of short stories and have several of her books on my to-be-read list including this one. 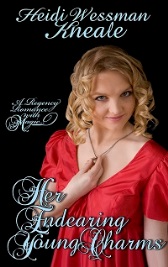 Miss Merribelle Hales spent years imbuing a silver locket with man-attracting charms. On her way to her first London Season, her locket is stolen--along with a kiss--by a highwayman. Her only clue to his identity: a pair of intense eyes. This vexes her. Without her best charm, how will she ever be able to compete on the Marriage Mart? It would be so much easier if she didn't have to compete at all.

Lord Alexander Rochester has worries aplenty. His ailing father's estates are woefully in debt, so he must seek a wealthy wife. His courtship of Miss Hales goes terribly awry with a simple kiss that leads to his slapped face and an accusation of theft.

It's a case of mistaken identity. Alexander knows and fears the real culprit. He faces the loss of his father, his estate and Miss Hales--whom he's loved since childhood--by the hands of the Handkiss Highwayman.