Today's promo is for Lana Pecherczyk and her novel Robin Lockslay. I'm a huge fan of Robin Hood and Lana's gender bending twist on the popular story is so intriguing to me. 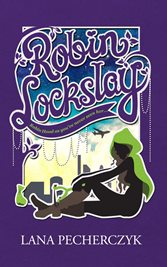 After Richard Lionhart catches Robin Lockslay (hacker and street urchin extraordinaire) stealing his family heirlooms, he hires her to ferret out corporate espionage at his charitable foundation in the heart of Nottingham City.

But can she solve the mystery, thwart her dashing but sometimes unwanted suitors, avoid eviction, and save the poor … all without being arrested?