My day yesterday at the motocross was a little more eventful then I would have liked. For those of you with a squeamish stomach you might like to stop reading now because the story that follows isn't pretty.

It was the first race of the day and I was having a great ride. Everything was going perfectly and I was catching up to the guy in front of me - I was flying. Then I went around an S bend in the track, the slowest section, and the back end of my bike skidded out and I dumped my bike on the ground. My finger got squished between the clutch lever and the handle. It hurt like hell and I couldn't lift the bike one handed. I got my hand out but the tip of the glove was still caught in between the clutch ​and the handle. So I took off the glove and that's when I noticed I'd cut off the tip of my finger!

I couldn't believe it. I slapped my good hand over injury, elevated it and put pressure on it. ​Then I walked off the track to get help.

My first thought was losing part of my finger was going to make typing more difficult.

Anyway by this time people had figured something was wrong and had come to assist me. I sent my husband to fetch my glove which had the rest of my finger in it and got some first aid and oxygen at the club house. Then we went into Narrogin hospital for help. 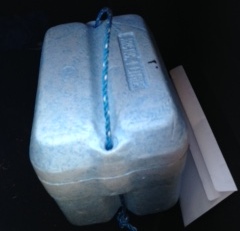 The staff in ​the emergency room were excellent. They numbed my finger, put the stub on ice and called the guy in to do an x-ray. Within an hour or so I had a surgical appointment in Perth for that afternoon and my husband and I headed off.

My wonderful father-in-law met us halfway so we could swap cars. We didn't want to be pulling a trailer through the city and parking would have been a nightmare. 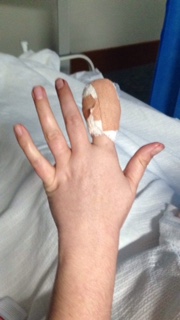 ​At the hospital I was admitted, given a room and by about 5 pm I was in surgery. The surgeon couldn't reattach the missing bit - I think it was  too squished and the end of the bone had broken off. I'm not certain how much of the tip is gone as I didn't see the doctor after surgery. I'll see her on Friday to get the dressing changed and find out then.

In the meantime I'm typing one handed and taking all the pain meds I'm allowed! A friend suggested I can use a rubber thimble on the end of my finger to help with typing if necessary, which is a nice work around.​

It wasn't the type of day I was expecting, but I'll take it one day at a time​. There's no point worrying about something that can't be changed.