I honestly can't keep up with Jenny Schwartz. She has a whole new series out that I haven't read yet, but it's definitely one I want to read. I really like Jenny's style of writing. Hollywood Demon is the latest in her The Collegium series. 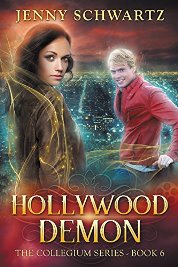 ​A camera can’t steal your soul—but a demon can! Mark Yarren suspects a demon has found a way around the spell his great-grandfather cast to prevent demons sucking souls through the camera’s lens. Digital photography dangerously omits the silver wash that was photography’s century-old defence against Hell.

Mark is Hollywood royalty, descended from the early Hollywood stars: the studio bosses and directors, the producers and actresses. Now he lives alone in his palatial Beverly Hills estate.

Well, not quite alone.

Clancy Ramirez is back! She’s tried life in New York, in Iceland, and in Hawaii, but she missed California. She missed the grumbling roar of the San Andreas Fault with its leagues-deep molten geology. Clancy is a geomage and she can make the earth shake—or grow still. But California isn’t her territory. She has no place intruding or tapping its energy.

But a demon shackled for a century is breaking free, and Collegium rules, old heartaches and strained family loyalties will break, too.

The Big One is coming.

"Hollywood Demon" is a completely stand-alone novel in "The Collegium" series.