Laura Greaves is one of my RWA committee members this year. While I was checking out her website, I noticed her book The Ex-Factor and I have to admit, it's got me intrigued. It will have to go on my to-read list! 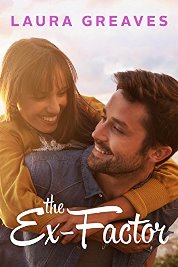 Talented, gorgeous and hopelessly in love, American movie star Mitchell Pyke and Brazilian supermodel Vida Torres were Hollywood's most talked-about couple. They seemed destined for 'happily ever after' – until Vida left Mitchell for his best friend, and Mitchell publicly vowed he would never love again.

Sydney dog trainer Kitty Hayden has never even heard of Mitchell Pyke. Still reeling from the loss of her mother, Kitty is too busy cleaning up the various messes made by her indolent younger sister, Frankie, and trying to find a girlfriend for her terminally single best friend, Adam, to keep up with celebrity gossip.

When her work takes Kitty to Mitchell's movie set, their worlds spectacularly collide. The chemistry between them is undeniable – and it's not long before Kitty is turning her life upside down to be with her leading man. But as Kitty quickly discovers, when someone as famous as Mitchell Pyke tells the world he'll never love again, the world listens. And the vindictive Vida is never far away. With constant reminders that she's merely a consolation prize, how can Kitty compete with such a tenacious adversary – especially when she starts to suspect that Mitchell isn't over Vida after all?