Last weekend I got to play at being Sherlock Holmes. My husband and I had been given tickets to the Escape Hunt in Fremantle. It was so much fun. 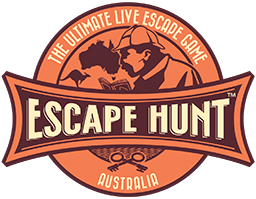 Basically we got locked in a room for 60 minutes and had to solve the clues in order to get out. There were three padlocks in the room - the type where you have to put a code in to unlock them. The first puzzle wasn't too hard, and we unlocked a few more clues. But the next one stumped us for ages. We knew the numbers, but not the order they had to go in.

When we finally figured it out, we were kicking ourselves for not getting it sooner because it was so obvious. It was actually reasonably logical. There were two things to figure out:

1. The numbers/letters required for the padlock

And there were different clues for each one. I'll admit we did start to get a little bit panicky as the time wound down. It's amazing what a ticking clock does to add tension!

I won't give any more detail about the room we were in, just in case you want to check it out yourself.​ I'm looking forward to going back and trying a different room and seeing if we can solve the puzzles any faster. You can have up to five people in a room and need at least two. I think an extra mind or two working on the clues would have been handy!