Bronwyn Stuart has crossed from historical romance into contemporary romance with her latest book, Mixing Business With Pleasure. 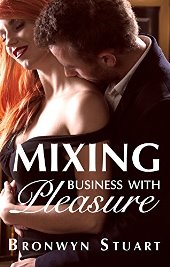 What’s a girl to do when she finds herself naked except for her stilettos and backed up against a cold mirror, stuck between a rock and a very hard man?

Alison Marcum loves her baby brother and would do anything for him—until the day his loan sharks arrive on her doorstep and demand she pay them ten thousand dollars or else.

With no way to repay the money, and not wanting to find out what they’re capable of, Alison transforms herself from boring social worker to smoking hot model—but getting work isn’t going to be the hard part for a woman who’d promised herself she’d never step in front of a camera again.

Sam Mason is overseeing a jewellery advertising campaign, and after spending ten minutes in the boardroom with a nearly naked Alison, he decides he might actually enjoy the job. Strictly business, though. Sam’s been burned by a model before and no matter how attracted he is, there’s no way he’s getting involved.

As the lies begin to unravel and the loan sharks get impatient, will they both risk it all to be together or lose it all in a bid not to repeat the past?