The official launch of Blaze a Trail was held on the weekend. I'll write a recap of it on Wednesday, but today I want to talk about cooking. I decided that since the launch was going to be mid-afternoon, it would be nice to have afternoon tea, in particular some treats from El Salvador.

So I contacted my Salvadoran friend for ideas and she recommended pasteles de piña and a corn drink called atol de elote. 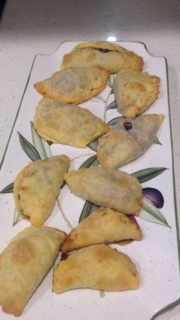 I googled for a recipe and found a couple for pasteles de piña and one for tres leches (three milk) cake.​ I actually mixed the pineapple pasteles up - took the filling from one recipe and the dough from another because it seemed easier. Then Friday night I started cooking. The pasteles were pretty easy up until it was time to put them together. I've got to say I'm not the most artistic person and they looked a bit lumpy and distorted.

The three milk cake was easy as well until I got to the part where I had to pour a mixture of milk, condensed milk and evaporated milk over the top. There was about 1300mL of liquid which seemed like a lot. I started slowly, letting it all soak in before pouring more over the top. But then it started to get kind of soggy. I cut a little section out to check and decided I didn't need to put the extra 300mL on the cake. I put it in the refrigerator until the morning. 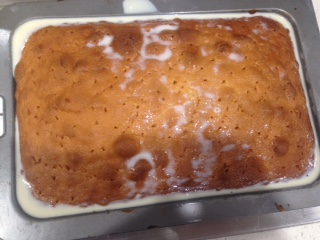 The next morning I decided to make the cream topping first thing so it was all ready to go. I poured the thickened cream, sugar and vanilla essence into a bowl and started whipping... ten minutes later it was no thicker than when I started. So I googled 'thickened cream won't thicken' and discovered that light thickened cream (which I had used) doesn't actually thicken! Damn. So much for trying to be a little bit healthier. There was a suggestion that adding icing sugar might thicken it so I added the sugar bit by bit until I'd added about 5 tablespoons. Aside from making it so sweet that my teeth hurt, it didn't actually help thicken the cream. So I dashed to the shop, bought some full-fat thickened cream, checking this time that the container said it would whip, and went back home. This time it worked and I tipped the not-too-soggy cake out of the tin and covered it in cream. It looked amazing.

At the launch, both dishes went down a treat. The pasteles were gobbled up and only a couple of pieces of the cake were left. It was a lot of fun to try something different and get a taste of a different culture. I'll have to work out what I'll do for my next launch!​