I went to my 20-year high school reunion on the weekend. I've got to say I was a little nervous as I hadn't seen most of these people since our 10-year reunion. Some of the names that popped up on the Facebook event weren't even names I remembered! However I did know at least a few people who were going and I was excited to catch up with them.

​Before the reunion, I dug out the year book and flicked through it. The main thing that came to mind was, 'look how young we all were!' I remember thinking at seventeen that I was pretty mature and we were the oldest kids at school so we knew everything. LOL. 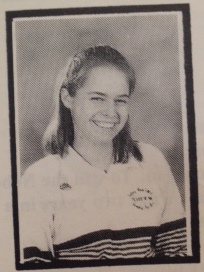 The year book had quotes from everyone, and the usual most likely to... section. I was voted most likely to succeed. It's funny, because that's such a vague thing. What success is to one person, is nothing to someone else. So do I think I've succeeded? I guess to some degree I do. After I figured out what I wanted to do with my life (be an author), my goals were to become published (Tick) and to be able to write full time (Tick). The third part of that, to be making ​a six-figure income from my writing, hasn't been achieved yet, but I'm working on it. In actual fact, one of my friends at the reunion got us all to say where we want to be at the next reunion, and I told them my income goal.

While I was digging around in my old school things, I discovered a journal in which I had all of my friends write messages to me. This was done in the last few weeks of school and I took photos of everyone and stuck them in. It's so funny to read through the words, and try to remember some of the in jokes of the time.

High school was a relatively fun time for me - I know it's not for everyone - but I don't miss it. For me, life began after I graduated and though there have been highs and lows, I'm happy where I am. ​

So how was the reunion? It was a lot of fun - a load of laughs and reminiscing, as well as chatting about what we've been up to for the past 10-20 years. ​We even made tentative plans to get together more often. Let's see if it happens!