Today’s promo is from my friend Belinda Williams. Heartthrob is set in Hollywood and sounds like it’s full of glamour and celebrity. 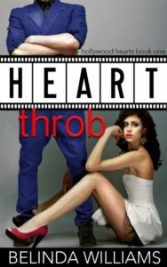 CAN AN AVERAGE GIRL SURVIVE HOLLYWOOD?

Ally Valenti doesn’t belong in Hollywood. Not like her friend and actress, Lena Lyons. Lena’s convinced Ally to pursue her dreams of fashion design, starting with some gowns for the awards season.

Which Ally will get around to creating as soon as she can stop looking at Jacob Swan, Lena’s latest co-star. Not that she’s staring. Ally’s skeptical of anything celebrity and it’s not like she’d be pathetic enough to fall for a Hollywood heartthrob.

Then Ally learns there’s more to Jacob than his good guy, all-American persona. She finds herself torn between the desire to get to know him better and her determination to stay out of the limelight.

Of course the media has other ideas—and someone doesn’t like all the attention Ally’s getting. When threats aimed at destroying her fashion career go too far, Ally’s convinced she’s living in crazy town.

The sensible thing would be to retreat home before it all ends in spectacular fashion. But will Ally be leaving more than her dreams behind if she says goodbye to Hollywood?

This glamorous, fast-paced contemporary romance that will make you smile, is perfect for fans of Rachel Gibson, Victoria Dahl, Susan Elizabeth Phillips, and Liliana Hart.