I went to an NXT show on Monday night and had an absolute ball. NXT is the developmental division of World Wrestling Entertainment and it has become really popular in the last few years. As I was waiting for the show to start, I realised that wrestling has a lot in common with the romance genre. You don’t see it? Let me explain. 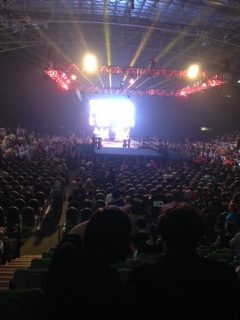 Likewise, anyone who has ever read a romance will know that there’s a whole heap of diversity and depth to many of the stories and is read by men and women in all different careers.

Both rely heavily on good characters. It doesn’t matter how good the wrestling or the romance plot is, if the viewer/reader can’t connect with the character then it’s pretty much pointless. People want characters they can love or hate, that they can cheer or boo. The roar of the crowd when certain wrestlers’ entrance music came on was deafening.  There were definite favourites and it made the matches more exciting when the crowd was behind one of the wrestlers.

In romance, it’s the hero and heroine that the readers follow. If the reader can’t empathise or love the characters, then they’re not going to bother reading the story.

So before you dismiss either wrestling or romance out of hand, how about you give them both a chance?