We got off to an early start today hoping to beat the heat. We parked down in Chinatown and then proceeded to wander around the streets, reading the plaques which explained the history of the place, and ducking into shops to see what we could buy. Broome is the heart of the pearling industry in WA and there are many places you can buy exquisite jewellery made from pearls. There were some lovely pieces, but nothing in my price range!

We stopped for coffee along one of the main streets and people watched. This week is the Shinju Matsuri Festival (Festival of the Pearl) and there are all sorts of interesting events on around the town. They were setting up for a couple of things while we had our drinks.

I bought some cards which had some beautiful photography on them, before we headed over to look at some old Pearl Luggers. 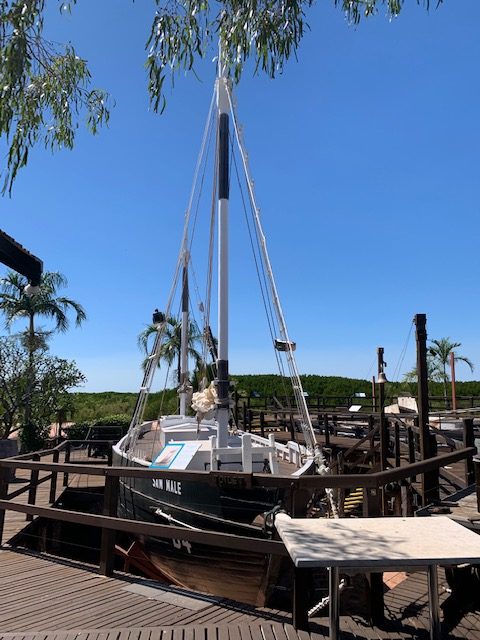 The history of the pearling industry is fascinating and disturbing. Some of the divers were forced down and they had to wear heavy suits which had air manually pumped into them. So many died and getting the bends was common. I'm glad things have improved today.

We were going to head to the museum next, but we decided to have an early lunch at Matso's Brewery.

We arrived just as they were opening and we were glad we did as it was a never ending stream of people. My recommendation is if you want a table, you should reserve it ahead of time. Neither Luke nor myself are big beer drinkers but we were curious about the mango beer, so in the end we ordered a taster paddle with five choices. 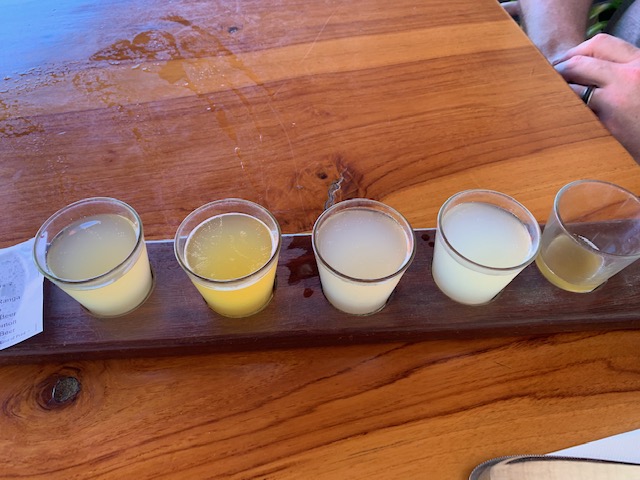 From left to right was: the Angry Ranga (Chilli Ginger Beer), Chango Beer (Chilli Mango), Ginger Beer, Hard Lemon and Mango Beer. Both chilli beers left a nice tingle in my mouth, but my favourite was the Hard Lemon Beer which didn't taste alcoholic at all.

We had a few shared plates for lunch and Luke particularly liked the Dragon Wings (chicken wings coated with a sweet glaze). By the time we were done, the museum was shut, so we'll do that tomorrow instead. It's just one of the lovely perks of staying a week here, is we don't have to rush anything! Tonight we're off to the Sun Pictures to see Tenet which should be fun.