I've got Perth local Bree Darcy on my blog today with her debut novel, Don't Mention the Rock Star. It sounds rather intriguing! 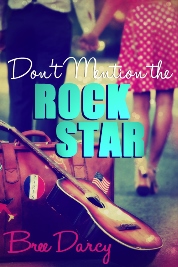 They fell in love in an instant … so why have they spent a lifetime apart?

As a teenager Kellie dated an American boy but circumstances meant they went their separate ways. Now he’s back and she’s so tempted to see him again. But two decades have passed and they are both married with children.

And the last thing a celebrity reporter like her needs is the world finding out about her past relationship with a rock star. Especially as Kellie’s husband doesn’t even know she once dated AJ Dangerfield, lead singer of legendary band Danger Game. And she has no intention of him finding out. EVER.

As Kellie deals with a demanding boss, a bullied son, an infuriating mother-in-law and a best friend who won’t act her age, she finds herself playing a dangerous game. What will happen if her two worlds collide? And is it possible that first love never fades?

Set in Australia, this compelling debut asks: do you believe first love is worth a second chance?