The best part of the Galapagos Islands for me was the snorkelling. It was out of this world. The water was a perfect temperature and the clarity was amazing. 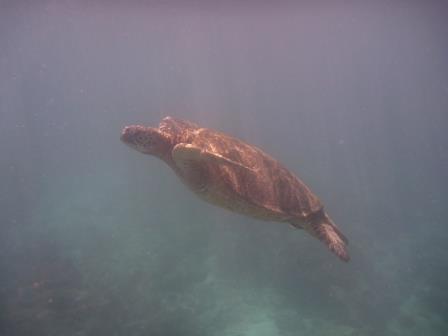 There were a few things I really wanted to see: a turtle, a shark and swim with a sea lion.

We hit it lucky with the turtles because it was breeding season and they were everywhere.​ I have never seen so many turtles mating in my life, and I don't want to see it again! However the places where we went swimming weren't where they were getting it on, so we were able to see them eating and just swimming around.

The sharks, while not plentiful, were around. I saw only the white-tipped variety​, though I was hoping to see a hammerhead. My husband and I had a bit of a laugh because if anyone yelled "Shark!" while swimming in Australia, everyone would get out of the water quick smart, but in the Galapagos, we all swam as fast as we could towards the person yelling! 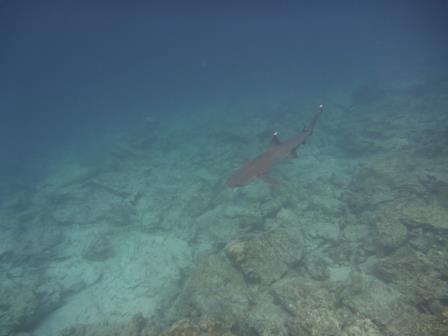 Our waterproof camera held up really well and we got some great shots. Aside from the larger animals we saw such an abundance of fish; brightly coloured, big ones, little ones, whole schools of them. It was incredible to swim amongst them and have them slowly move out of your way.

But I must say the absolute highlight were the sea lions. On the first dive we had​ two sea lions darting past and then coming back to play with us for a little while. Then on another day I was swimming by a rock and all of a sudden there was a sea lion right next to me. I thought I'd just missed it in the shadow of the rock but when I checked out the video afterward, I think it actually slid off the rock to join me. My apologies for the shoddy camera work, but it seems swimming and filming at the same time is not my forte!